No, we’re not talking about pugs getting married – that just seems a little  pretentious – seriously cute, but over the top. No, we’re talking about your pets playing a part in the day, or perhaps involvement of an animal that is means something to you.

A lot may depend on how important your furbabies are to you, not to mention the policy of your chosen venue, but animal involvement in Weddings is certainly a growing trend. A few years ago butterfly releases were all the rage and whilst they could be spectacular, there were environmental and animal welfare concerns voiced at the time and they don’t seem as popular now. Next came dove releases which were even more dramatic, but they have been eclipsed in recent times by ring-bearing owls and raptors swooping down the aisle. Is it growing up with Harry Potter that has given us the magical association of owls with the delivery of important and life-changing gifts? Has Game of Thrones and similar period drama re-ignited the ancient art of falconry, or is it just canny marketing by these niche interest groups? We asked Dave Wall from Masterpieces Photography + Video what involvement he has seen with animals over the years.

‘Animals at weddings certainly isn’t a new thing – over the years I’ve photographed butterfly and dove releases, seen a very cute bulldog deliver the rings, had a bride ride a horse during the photo session and even photographed a couple with their potty calves. One bride even wanted to be photographed with her prize-winning bulls, but (wisely), decided against it on the day. I love it when the couple includes something completely unique in their day and I relish the challenge of incorporating something out of the ordinary into the day.’

‘One great way to include your pets, without them feeling uncomfortable, is to have them at the photography session. There are a lot less people, and it is a much more relaxed environment to bring of the best in them.’

The team recently saw (and bravely patted, I may add), a falcon at the Ideal Bride expo at the Mercure Carrara over the weekend and was lucky enough to be invited to Maleny Manor earlier in the year where they saw owls delivering rings and make no mistake, it is a truly spectacular sight. Birds, especially large ones, can be unsettling (or indeed frightening), for some people, so perhaps make sure no-one has a phobia before planning to include one in your day. Likewise we think it’s wonderful if your pets are that important to you that they are involved, however, it’s not something that should be taken on lightly and make sure they are going to be comfortable and have someone designated to look after them once their part is performed. 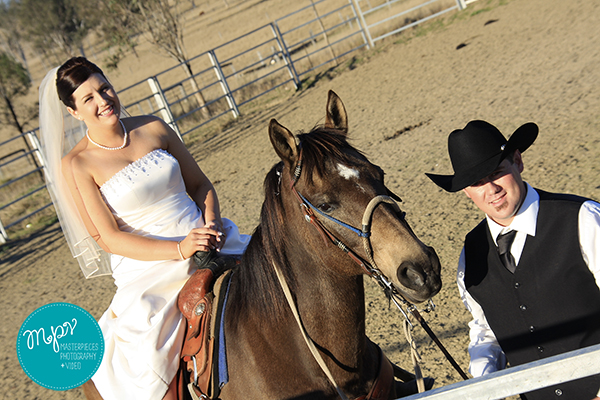